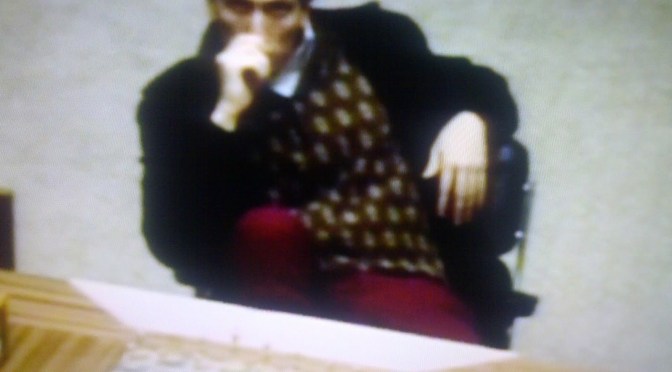 Bobby Fischer was arguably the greatest chess player of all time. American chess champion at 14, grandmaster at 15, world champion at 28. A brilliant but brief career cut short by schizophrenia. By the time of his death in 2008 Fischer was a ranting, anti-semetic caricature of insanity.

There are a number of possible reasons why Bobby Fischer went mad. Genetics perhaps. An unbalanced upbringing. The pressures of celebrity. The possibility his paranoia regarding CIA and KGB plots to control him was less than 100% paranoid. But the idea I find most credible is put forward in the documentary film Bobby Fischer Against the World, that Fischer’s insanity was intrinsic to his greatness, both caused by diving too far in to the near infinite complexity of chess.

It is estimated that there are the same number of potential moves in chess as there are atoms in the entire solar system. “Look in to the void, the void looks back in to you” as Nietzsche said. And the infinite complexity of chess is a void of a kind. The mind can contemplate it forever and never reach a conclusion. Which raises the very real possibility that the mind and brain will work themselves in to states of madness in the attempt.

Mindfulness Based Cognitive Therapy suggests that many mental health disorders including depression and schizophrenia can be caused by cyclical rumination. Thoughts turn over and over in the mind, literally overworking the brain which becomes physically exhausted, running out of receptor chemicals which support neurone communication. In the short term this produces negative mental states. Over time it can cause irreparable damage. Thinking too much can literally drive you insane.

A complex system like chess or a hard math problem can do this. But so can your emotions. Intense unhappiness, anger or traumatic experiences can drive the mind in to downward cycles of rumination. There is often no answer to be found to these emotions intellectually. All the thinking serves to do is exhaust and possibly damage the brain, and exacerbate the problem. Which is why not thinking about a complex problem or emotional situation is often the first step to finding the answer. The brain recovers its chemical balance, and unconscious processes that do much of the ‘heavy lifting’ of cognition provide an answer.

A novel, or any sophisticated work of art, can be thought of as both a very complex AND emotion centred problem. Your mind is trying to track all kinds of patterns on levels of plot and theme, whilst also experiencing the heightened emotional states common place in fiction. It’s worth considering that if, as many writers do, you find yourself affected by depression or other mental health problems, while they may have many extrinsic causes, they may also be intrinsically related to the writing project at hand. And it’s also worth considering ways of looking after your mind and brain whilst working on any major project.

A few ways of avoiding mental exhaustion whilst writing:

1. Write on the page, not off it.
If you find yourself thinking about the story at all times of day and night, try putting these thoughts on hold and keeping them for the periods when you are actually writing

2. Take regular breaks.
And actually stop thinking about the story during them. Experience some real life instead.

3. Is the project too difficult?
This can be a hard thing to admit. But our intellectual powers grow with practice. If you are struggling to write the project, you may just not have the technical or intellectual skills for it yet. Rome wasn’t built in a day, and neither was Game of Thrones. George R R Martin had decades of experience in fiction and screenplays before he tackled an epic work. If he hadn’t, he might well now be a gibbering wreck now too!

4. Sleep
One of the things about sleep deprivation is that it masks its own effects. Chief among which are bad judgement, which can persuade you you’re actually practicing good judgement. Quality of sleep is also important. Hence why that coffee is a bad idea, as stimulants interfere with your deep sleep patterns.

5. Meditation
A useful practice for a healthy mind in general, but particularly if practiced immediately before you write. We all bring an immense amount of mental clutter to each writing session. Learning what it is can help you put it to one side and focus on the task at hand.