No, not the lead female character in a planetary romance (although…) but the make and model of…my new guitar!!! The Faith Jupiter Hi-Gloss… 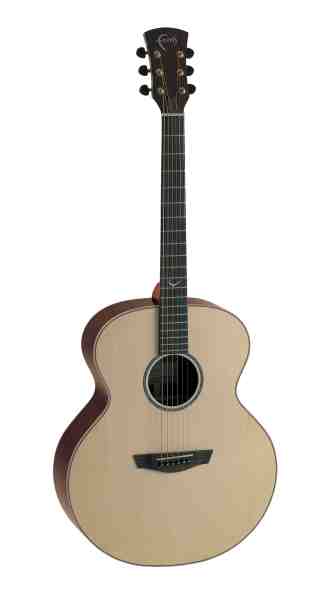 …I’ve had the same guitar now for over a decade, a Fender Gemini II, which was the cheapest starter guitar you could buy back in the mid-80’s when my brother purchased it. It sat in the back of his closet for about a decade before I had it, but I’ve been playing it ever since. I’ve reached the limit, even at my poor standard, of what you could play on that guitar and an upgrade was long overdue.

The Faith is GORGEOUS. I played it up against guitars four times the price and it outclassed nearly all of them. I wasn’t sure about the lack of fret markers at first, but now I really love the clean look with only the Faith glyph on the 12th fret. Its a jumbo body, meaning the largest size acoustic body you can buy. That gives it great volume, but doesn’t seem to make it any less subtle sounding when played quietly. And its really SHINY because of the hi-gloss finish.

Anyway…this moment of geek is now over. Go back to whatever it was you were doing please.