Occupy Wall Street has seemed genuinely hopeful and constructive to me since its first emergence. I hadn’t been able to identify why, so thanks to Lawrence Lessig for stepping up and putting his finger on it:

In brief, Lessig believes that Occupy Wall Street has the potential to become something more than a Left leaning protest movement against a Right centred political system. I agree, and hope it is possible.

We all need to openly admit to ourselves that our democratic political system has become corrupted. No political system is ever without corruption. But since the financial crash of 2008, the system many of us believed to be historically less corrupt than any other, has proved to be much more corrupt than we hoped. We’ve seen that corruption in the inability of our political institutions to reform a financial system that everyone agrees is broken, and we’ve seen it in in the open corruption of our media, in particular the Murdoch media, which has been proved as nothing more than a protection racket and propaganda machine.

At the heart of this corruption, as with all corruption, is  money. Money has always bought power. But it seems at this moment in history to have overwhelmed any and all opposing ideology. Our political system today only serves the interests of money. And that is the very essence and definition of corruption.

Corruption of this kind is not in the interest of any person of any moral standing, whether they are on the Left or Right of the political spectrum. Yes, the arguments of the Left in defence of society’s poor and disenfranchised must be addressed. Yes, the arguments of the right in favour of our innovators and wealth creators must be advanced. Public spending has to be reigned in, just as corporate profits must be effectively redistributed. All these arguments must be had.

But none of this can happen until corruption has been defeated again. The political argument has been hijacked, on both sides, by people who hold no political ideology, who have no moral standing, who believe in nothing but themselves and their own power. These people are always there. The sociopathic fringe who crowd around power like those ugly mutated deep sea fish around volcanic vents. We can’t ever get rid of them. But we do need to learn to recognise them again. We need to learn to see them on our own side, as well as on the opposition. And we need to unite with our opponents, however much we disagree with them, if we are to have a chance of tackling our real enemey, the corrupt and cowardly few who are doing so much damage to the world today.

Occupy Wall Street is, and must continue to be, not a protest of Left against Right, but the seed of a united movement of Left and Right against the corrupt and criminal elementperverting our political system. I believe it can be, if we make it so. 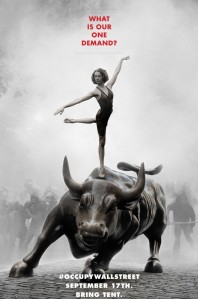