People used to accuse artists who took the corporate dollar of ‘selling out’. It’s a phrase that seems to have fallen from fashion, perhaps because art has become so aligned with entertainment in the popular imagination that it’s hard for people to see what  ‘selling out’ out even means any more. Why would you criticise an artist for selling out? Isn’t the whole point of making art to have something to sell?

‘Sell Out’ has never been an entirely fair form of abuse to throw at artists. Like that other standard insult of those who seek to dismiss the value of art, ‘Pretentious’, it’s both true and irrelevant at the same time. All art is pretentious…until the point where it isn’t anymore. The difference is often no more than a sliver of perception. Artists who want to continue making art have to find ways to sell what they make to someone. And so the many compromises of the professional artist (like the professional anybody) arise.

But is your art anything more than a product to sell? Do you actually have something to say, or are you speaking just for the sake of being heard? It’s OK to sell your art, but if the only purpose of your art is to sell, then you’re missing the point. 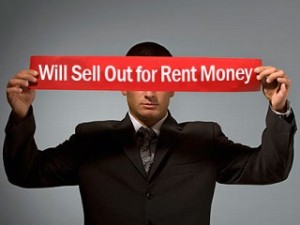 6 thoughts on “Selling Out”