With fascism growing at a terrible pace today, Olaf Stapledon’s words from 1937, written at the height of the Nazi menace, hold meaning for all sci-fi fans, readers, and writers.

This post could not have been written without the support of my patrons.

“Perhaps the attempt to see our turbulent world against a background of stars may, after all, increase, not lessen, the significance of the present human crisis.”

I’m privileged to be a part of the worldwide science fiction community. As a writer and blogger, as a graduate of the Clarion science fiction writers workshop, as a regular columnist on SF for The Guardian, and as a lifelong reader and fan.

Like many in the SF community and beyond, I’ve watched the emergence of modern fascism with bleak Lovecraftian horror. It feels as though our little world of sci-fi readers and writers got an early foretaste of this when a group of far right activists turned the Hugo awards into a platform for their bigoted ideology. But there’s a good reason why the Sadly Rabid Puppies targeted the world’s biggest SF award – science fiction can be a powerful way of resisting fascism.

The small minded nationalism that lead to Brexit in the UK, and the outright racism that fueled the Trump campaign, have left the whole world in no doubt that the far right is making its strongest push to assert fascist ideology on us all since the 1930s. That time it lead to global war. Today we are all searching for any way we can prevent that tragedy repeating. How can science fiction be more than an escape from today’s reality? One of the greats of the genre has an answer.

Writing in March 1937, at the height of the Nazi threat in Europe, the legendary science fiction author Olaf Stapledon wondered what response he and other writers could make in such dark times.

“In these conditions it is difficult for writers to pursue their calling at once with courage and with balanced judgment. Some merely shrug their shoulders and withdraw from the central struggle of our age. These, with minds closed against the world’s most vital issues, inevitably produce works which not only have no depth of significance for their contemporaries, but also are subtly insincere.“

Stapledon is keen to identify that a central risk for any writer, artist or creator in the face of terror, is too hide. But Stapledon sees an equal and opposite risk, for writers who “take up arms” as political activists.

“The very urgency of their service may tend to blind them to the importance of maintaining and extending, what may be called the ‘self critical self consciousness of the human species’, the attempt to see man’s life as a whole in relation to the rest of things. This involves the will to regard all human affairs and ideals and theories with as little human prejudice as possible. Those who are in the thick of the struggle inevitably tend to become, though in a great and just cause, partisan.“ 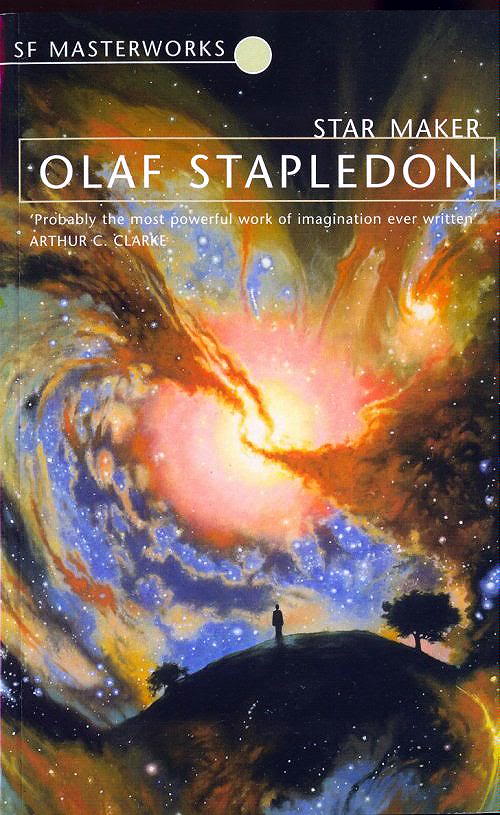 These words, that so accurately capture the conundrum faced by writers today, were written by Stapledon for the introduction to his seminal SF novel Star Maker. It’s a story that reaches beyond the bounds of human existence, to life in the broadest possible sense, on the galactic scale, and has been inspiration to generations of SF authors. And it’s a novel that, far from worshipping only at the altar of science, also dives headlong into the spiritual.

“At the risk of raising thunder both on the Left and the Right, I have occasionally used certain ideas and words derived from religion, and I have tried to interpret them in relation to modern needs. The valuable, though much damaged words “spiritual” and “worship”, which have become almost as obscene to the Left as the good old sexual words are to the Right, are here intended to suggest an experience the Right is apt to pervert and the Left to misconceive.”

That experience, in Olaf Stapledon’s thinking, is to see the world from a perspective beyond the human individual, or any political ideology. Stapledon believed that the highest calling of science fiction was to show us the universe, our world, and our selves in new ways. To see our “turbulent world against a background of stars”.

“The attempt to see our turbulent world against a background of stars may, after all, increase, not lessen, the significance of the present human crisis.”

As the last year has unfolded, and the peril of our new political situation has become clearer, my thoughts have gone to Star Maker many times. Seeing our moment in the full context of our history, and potential future, is a form of self-healing, and a way to reorient our perspective away from the immediate tumult, and back to the bigger, universal, picture.

Fascism can only win by reducing us to the most narrow minded and bigoted ways of seeing the world. Science fiction is a perfect way to show people the widest, most imaginative, and most hopeful ways of seeing. As SF readers and writers we might choose activism, we might choose withdrawal. But if we really want to make a difference, our best tool is to write, read and promote great science fiction.

A FEW CONTEMPORARY WRITERS I FIND HOPE IN: