There have been many great American novels. The Grapes of Wrath. The Great Gatsby. Underworld. The idea, at this point in literary history, has become a kind of self referential in joke. The great American novel is what young, over-intense MFA students yearn to write. But it’s still useful as an indicator of what we turn to the novel for – the truth.

Or, falling short of that lofty goal, an at least partially accurate insight into reality. 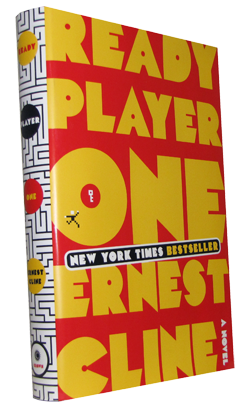 Ready Player One is not a novel anyone will ever turn to for insight into reality. It’s an escapist fantasy in the very lowest definition of the term. A story that doesn’t just create a fantasy world for its readers to slip into, but idolises the entire project of escaping into fantasy. Total immersion in fantasy isn’t just central to the world of Ready Player One, it’s how that world is saved.

Which is really a shame. Because if there is one sub-culture in the strange ecosystem of early 21st life that really deserves the insight of a great novel, it’s gamers.

Not simply because games are popular. In the casual sense everyone is a gamer now. Candy Crush seems to have more players than the extant population of the planet. But because within that culture spanning identity are a subset of people who are, in a far more intense sense, GAMERS.

“If I sound like a superior snobby a*hole about the negative effects of video games, it’s only because I’ve been there.”

I’ve been both. These days I play a few games of online chess a week. Like an alcoholic in recovery, I know my limits. Almost twenty years ago I was, for a short period, the world champion of a browser based strategy game called Stellar Crisis, a task that ate hundreds of hours I should have been spending on undergraduate studies. Three years later, a few days into a Counter Strike binge that would stretch over eight weeks, that would incite lower back problems I still suffer with today because of eighteen hour gameplay sessions, I was fired for no showing at my (admittedly crappy) job.

If I sound like a superior snobby a*hole about the negative effects of video games, it’s only because I’ve been there.

We live in a mass society. The world population, in my lifetime, has gone from 4 billion, to 7.6 billion people. The old world where, for better or worse, we all knew our place, within a community, nation and culture, is long gone. Now there are billions of us living in vast megacities whose only sense of identity comes from the media. From the tv shows we watch, and the video games we play.

“Gamers, whether they can see it or not, are the world’s underclass.”

Gaming, I think, is at the heart of this crisis of identity. We find in games an identity we can adopt  for a time. We find belonging and community in MMORPGs that we may never find in the world. We find status and, for the rare pro players, even wealth. And as global population rockets off towards 12 billion, we’re going to find ourselves in a world where billions of people live realer lives in games than in reality.

Which is a really fucking huge problem. Because gamers, whether they can see it or not, are the world’s underclass. It’s not the 1% of billionaires or the creative / professional class living vicariously in video games. Because those people get to live out their fantasies for real. No, gamer culture, with few exceptions, is the escape valve for people trapped in low pay service jobs.

Now THIS is a reality that needs a great novel writing about it. Gamer culture needs a Charles Dickens or a Victor Hugo, not an Ernest Cline. The drama of lives lived in poverty, serving coffee to your tech bros overlords, then “escaping” into the fantasy worlds of video games (made by the same tech bros) between shifts. And with no hope of this leading to a saviour-of-the-world conclusion. No, this is your life, a hero in games, but in reality, a servant.

The great gamer novel is yet to be written.

But damn do we need it.